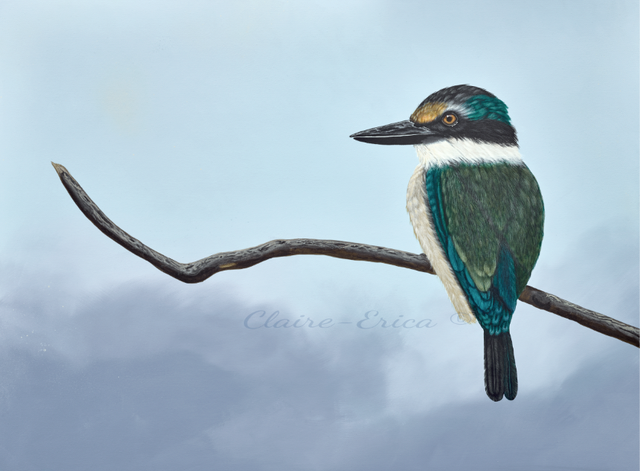 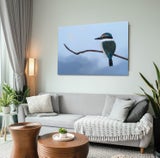 Kingfishers are found throughout the country in both coastal and inland freshwater. In New Zealand the species is also known as kotare (from the Maori kōtare).

It is called “sacred” for it was said to be a holy bird for Polynesians, who believed it to have control over the waves and were ascribed venerable power over the ocean.

A kingfisher, said to be the first bird to fly from Noah's ark after the deluge, supposedly received the orange of the setting sun on its breast and the blue of the sky on its back. It was considered a symbol of peace, promising prosperity and love.

"There is so much going on in the world, so many things that are a distraction to the now.  As I go through my day everyone around me is rushing and it is contagious, I feel myself rushing to keep up. Arriving back home to my studio I start to relax and be in the moment. I have the coffee grinder at the ready and the scent fills the air. It is welcoming to realise I look forward to that aroma. I make a point of sitting down to enjoy it, perhaps Contemplate, before getting back to my easel. Taking that moment is what is important, to value myself enough. My work is based on this. Taking the time for each other and really seeing the ones we love, walking the dog, reading a story. these are the things that make out day beautiful.
They say that as artists we paint our dreams and places we would rather be, it is definitely true for me. The background is there, though sometimes it is fuzzy, we need to focus on what is important.  So much of my day I would rather be in the feathers of this Sacred Kingfisher, he is the reminder that there is so much more to life, the Prince of peace "